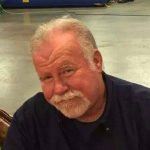 Bill was born July 22, 1954, in Kansas City, Kansas to Robert and Anne Mitchell. Before finally making Texas his home, he lived in California and Hawaii. He spent 22 years working for Miller Brewing Company, and as he liked to say “driving backwards for a living”.

After meeting his wife Tanya, he became an active member of Acton Baptist church.  Shortly after the two married in 2017 they moved to Elgin, Texas, after Bill retired from the Pecan Plantation VFD/EMS.

Bill was best known for his dedicated community service in Pecan Plantation. Bill, known to many as UB (Uncle Bill) served as a firefighter and EMT for the Pecan VFD/EMS rising through the ranks over many years to become Fire Chief. Bill was a devoted care giver to countless residents of Pecan. Bill saved numerous lives while in service to the community. Bill was highly respected in the Hood County area as a seasoned emergency services officer; a respect earned over many years of selfless dedication to duty. One of the things that gave him much joy and fulfillment was being a mentor and teaching others and watching them grow and help the community just like he did.

Bill is survived by his wife Tanya and his daughters by love, Mary Apple and  Cathleen Sargent and her husband Bryton and their daughter McKynlee. He is survived by his sister Karen Barton and husband Butch. Bill is also survived by his brother Tom Mitchell and wife Karen. Bill was especially proud of his nieces and nephews: Niece: Stacie Brown and husband Terry,  Nephew: Steve Barton and wife Eleanor. Great nephews: Branon, Brett and niece Taylor Mitchell. Bill’s joy of family continued onto many additional great nephews, Trace, Spencer, Alex, and Peter Brown and Nicholas and Will Barton. Bill Mitchell was much loved and will be greatly missed.

The family has requested that instead of sending flowers you would make a donation to your local fire department.